Beelzebub is one of the Seven Prime Demons and the main antagonist of the first arc of the story: Highschool DxD: Til Midnight. He is the mastermind behind the creation of the Special Children. Beelzebub is also the one who manipulated the events that lead to the release of Trihexa.

Beelzebub appears as a man in his early to mid-twenties. He has long white hair that reaches down to his back Beelzebub possesses sulfuric yellow eyes much like his fellow Demons. He wears dark clothes with tall purple boots reaching his knees and purple gloves with white outlines and a long black cape. Sometimes, he wears a black bull mask with red patterns on it. While possessing Akeno, he takes her appearance with her long black hair in a ponytail and yellow eyes.

Beelzebub is extremely cruel, deceitful, and selfish. Beelzebub has a sadistic sense of humor and took extreme pleasure in inflicting pain on others (psychologically or physically). An example is when he pits the Special Children in a death game partly for his own amusement as watching them kill each other brought him immense joy. He takes particular relish in killing his victims. The method of execution being pinning them to a wall and disemboweling them then setting them aflame from the inside out while their loved ones watch. However, unlike most demons, Beelzebub only kills when necessary.

Nevertheless, he has no regard for the lives of any non-demon or demon and frequently uses the threat of murder as a motivating factor in order to get others to follow his orders or to achieve his goals. Beelzebub is also a man of his word stating that he always keeps his promises. Beelzebub also shows respect to those who deserve it, calling Indra an honorable opponent just before triggering a banishing spell that ejected the God forcefully from the Rating Game Arena.

Beelzebub has a fanatical devotion to his creator, Lucifer. Leviathan describes Beelzebub as one of those psychotic religious members. Beelzebub would kill anyone and do anything to prove his loyalty and devotion to Lucifer seeing all who oppose her supposed will as traitors who do not deserve to live.

Originally, Beelzebub was not like how he is now. He was a very curious child and a loving husband. However, when the Great War broke out, Beelzebub's mind deteriorated with the death of young devils and the deaths of his siblings. Eventually, his wife's death pushed him over the edge and transformed Beelzebub into the Beelzebub of today.

Born shortly after the Fall of Man and Lucifer's Fall from Heaven, Beelzebub was born after Mammon, making him the youngest of all Seven Prime Demons. After Beelzebub came the Original 72 and the Extra Demons. He was a bright child if not odd, according to Lilith. Always taking interest in the world around him, Beelzebub rarely interacted with his siblings. However, he noticed them all when they began creating their clans with someone else. Jealous that he was alone, Beelzebub went to Lucifer and asked her to create him a partner to spend his life with. Finding it cute, Lucifer obliged and created the perfect partner for Beelzebub. The name given to her by their mother was Ekra. Beelzebub made it his mission to show her the world he loved. From their union came a son named Bidleid Bashun.

When the Great War broke out, Beelzebub surged to the front lines alongside Lucifer, decimating legions of Angels in his sight. He encountered the Fallen Seraph Shemhazai and engaged him in combat above the fields of France. Utterly defeating Shemhazai, Beelzebub's killing blow was interrupted by the Archangel Gabriel, who easily defeated him without using her full power. Forced to retreat, Beelzebub turned one last time as the Archangel entered her true form and reduced an army of Devils and Fallen to nothingness.

Over time, Beelzebub grew angry and hateful at the world. It all started with the death of his younger sister, Gremory, at the hands of Seraphiel. The deaths of countless innocent Devils began to weigh down on Beelzebub. As a Devil King, he felt responsible and that responsibility began to chip away at his sanity. During the battle of the Mediterranean, Ekra was slaughtered in front of Beelzebub, impaled by a number of light spears before her head was ripped off her body and mounted on a pike. Beelzebub snapped. His mind broke and he went on a killing spree. It was said that even the Greco-Roman Gods did not interfere for fear of them being added to the body count. Hades even recalled all his reapers. The Mediterranean bled red that day.

In Beelzebub's final battle, he attempted to take down the Archangel Raphael, only to be defeated. Everyone assumed him dead, even Satanachia, however, Beelzebub survived. Spending the next several years recovering, Beelzebub received word that his mother had passed on and his eldest sister had disappeared. Attempting to find out what happened, Beelzebub discovered that Mammon and Belphegor were still alive, being the last of the Prime Demons in the Underworld. Satanachia had fallen in the final battle against Yahweh.

Over the years, Beelzebub began to interfere with the events of history, triggering several wars for an unknown purpose such as the Devil Civil War and World War II. In 1945, Beelzebub fought and slaughtered most of the Divine Ten before disappearing. 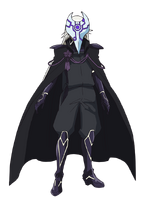 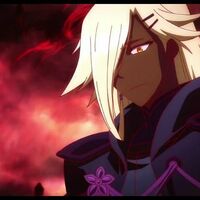 You're not even worth killing

Masked Beelzebub
Add a photo to this gallery
Retrieved from "https://dxdfanon.fandom.com/wiki/Beelzebub?oldid=105022"
Community content is available under CC-BY-SA unless otherwise noted.