Amatsu-Mikaboshi — also known as Ama-no-Minaka-nushi — is the Primordial Shinto Cosmic Entity of Sin, Malice, and Stars. It is the Primordial Chaos that existed before the Creation of the Universe, and therefore predates the entire Shinto Pantheon.

Amatsu-Mikaboshi was born in the Primordial Void that existed before the Universe. It is the antithesis to the positive aspects of life in Shinto Mythology, and the force that predated the Universe who existed alone in absolute darkness. During the times of Creation, the energies inside the Primordial Void became unstable, causing it to fragment. This fragmentation, in terms, caused the three Kotoamatsukami to manifest into existence as all the energies collided into one another.

Although most of Mikaboshi's original self had been blown to true nothingness, some of its aura still remained. In time, Amatsu-Mikaboshi would grow more and more powerful, feeding off of other beings' negative emotions, lustful desires, nightmares and furious outbursts. It also used the silent energies residing deep in the shadows to expand its range of powers.

Amatsu-Mikaboshi has resided deep in the depths of Soku-no-Kumi. A realm very similar to Limbo, which hosted the Shitdigma- a group of deceased beings, who have sinned with heavy crimes during their lifetimes, which have also fallen to the corruption that Amatsu-Mikaboshi's mighty presence spreads. Though Mikaboshi cares very little for most of the Shitdigma and their past deeds, it nonetheless does its duty as a ruler of the realm, mostly because it has the chance to feed surplus amounts from the Shitdigma's overwhelming negativism.

Though it has no current plans and maintains its status as the ruler of Soku-no-Kumi, Amatsu-Mikaboshi's main desire is for everything to return to the brink of boundless chaos and nothingness.

The reason for it's current tranquility connects back to many ages ago where Amatsu-Mikaboshi did in fact attempt to destroy the world. However, due to essentially rushing things, it lost to Amenominakanushi, who sealed it back into the depths of Soku.

As an incarnation of the Primordial Void, Amatsu-Mikaboshi has no singular form, meaning that any indication of its original form is rather elusive. It can be characterized as a frightening endless mass of absolute darkness that induces utter madness and insanity. After the Primordial Void's fragmentation, its true form's lethal effects have diminished in their effectiveness, though Mikaboshi maintains its original form's visage.

Amatsu-Mikaboshi's corporeal incarnation is that of a young woman of unparalleled beauty with a revealing midnight black dress that adorned her Junoesque form. She has long wavy black hair and dark crimson vacant eyes that would occasionally glow ominously. She also wears long black gloves and black boots. There are small holes in the outfit in the area of her well-toned stomach, making her look even more alluring.

The entity also possesses another appearance, in which it takes the form of a woman with long black hair, pale white skin and black eyes. Her attire compared to her alternate feminine form, is far more moderate, as she is dressed in a dark uniform that is similar to the school outfit of Japanese girls.

Though the original Primordial Void was non-sapient and had no traces of a personality, the fragment that would become Amatsu-Mikaboshi is a bitter and cold force of nature, and as such, harbors an acrimonious and faintly hidden contempt for all that is life. This is presumably due to its annoyance of the concept of Life essentially 'ridding' of the Primordial Darkness that Amatsu-Mikaboshi originally was.

Due to being a remnant of the original Primordial Void, Amatsu-Mikaboshi is in fact an emotionless and apathetic individual. It is well aware of the dichotomy between good and evil, as well as the difference between right and wrong, but does not care for the concepts, as such notions are considered beneath the cosmic entity.

Ironically, while Amatsu-Mikaboshi itself views mortals and their emotions as small pointless concepts, it may have an unconscious unease in trying to understand them, due to the possibility of becoming human itself, something which contradicts with its very nature.

It is implied that in the past, Amatsu-Mikaboshi was a very impulsive and impatient force of nature, as it immediately tried to destroy the world, despite its recent fragmentation from the Primordial Void, and therefore was much weaker than its progenitor. Due to this, it underestimated Amenominakanushi, and was sealed away in Soku. In the current times, Amatsu-Mikaboshi is suggested to have a more calmer disposition, harboring curiosity and intrigue over Amenominakanushi's increase in power.

Immense Might: Though the original Primordial Void was a being of absolute power with seemingly no limitations whatsoever, its essence splintered after the explosion that set off Creation. As Amatsu-Mikaboshi is but a simple fragment of the Primordial Void, it can be assumed that it was extremely weak in the far past when the Universe was younger. At some point in time, Amatsu-Mikaboshi learned how to feed itself of the shadows and dark energies of the Universe, coming in at all forms. In present times, Amatsu-Mikaboshi's strength has already risen to levels beyond even the likes of the most powerful of entities, such as the Kotoamatsukami. It can causally destroy realms of the Supernatural World and has the potential to bring all Life to extinction if it was given the proper opportunity to.

Immense Durability: Amatsu-Mikaboshi is virtually indestructible and truly immortal. It seemingly cannot be destroyed for good and can only be neutralized for a certain period of time, unless it is harmed by a being of truly infinite power. It is possible that by further feeding itself with dark energy, Amatsu-Mikaboshi can increase the level of its endurance.

Immense Speed: Amatsu-Mikaboshi has shown to possess great levels of speed, both in its female incarnation and primordial form.

Primal Darkness Manipulation: Amatsu-Mikaboshi, being once a part of the Primordial Void, derives its main source of power from this element. It can control the primordial darkness that its original incarnation was composed of, and use it to further increase its power and the severity of its essence.

Due to Amenominakanushi being a catalyst (minor and then major) to both its first and second fragmentation, he is perhaps the only existence Amatsu-Mikaboshi holds a specific amount of hatred for. Though given its nature, even those feelings are marginal at best.

Issei's interactions and communication with Amatsu-Mikaboshi are far too minimal for them to develop any state of affair, whether its familial or friendly on a neutral level. The two's feelings towards each other are quite mixed, as well.

Issei, on one hand, shows deep respect and feels slight empathy for it, due to how lonely it seems to be, showing that he holds genuine worry for the entity. Like Musubi and Takami, Issei considers Mikaboshi to be a part of his family and as such, affectionately refers to her as "Grandma Mikaboshi". On the other hand, Issei is also quite frightened of Amatsu-Mikaboshi and its powers, and more importantly, its nihilistic intents. He keeps a cautious and equally nervous mind when around it, because he is aware that he can be destroyed effortlessly. This leaves Issei's opinion on the dark entity a bit conflicted and confused, but he nonetheless demonstrates a great amount of care for its well-being, and will more often than not, opt to leave it be.

Amatsu-Mikaboshi's opinion on Issei is as equally conflicted as his on it, but much simpler. Because of its apathetic nature, Amatsu-Mikaboshi doesn't have much to say about Issei. Issei's existence slightly invokes its ire, as he is a semi-embodiment of the element that is in its opposition - Light. Also, because of how far below it Issei is, Amatsu-Mikaboshi often views him as a tiny speck of light, an atom. However, Mikaboshi finds his familial way of speaking towards her quite bemusing and holds a small niche of favoritism towards the young Solar God. It wouldn't mind conversing with him. Amatsu-Mikaboshi is also somewhat indulgent of Issei's presence, as the latter is perhaps the only individual to not show any traces of antagonism or hatred towards it. Like many of the other primordial entities who have interacted with Issei, Amatsu-Mikaboshi also prefers to refer to him with a belittling nickname - 'Little Twinkling Star'. 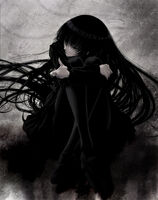 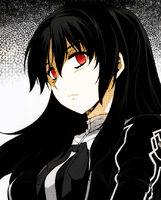 The Nothingness Before Shinto

"You have heard of my more popular title, right?...The God of Evil and Sin." 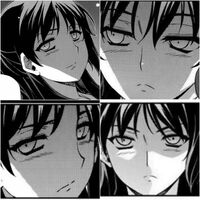 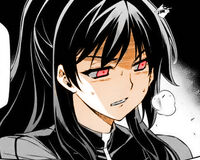 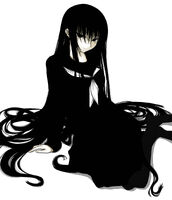 "Stare at your heart's content...I assure you, you will see absolutely nothing." 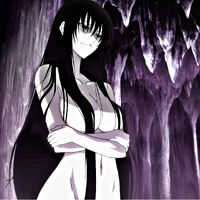 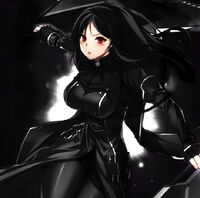 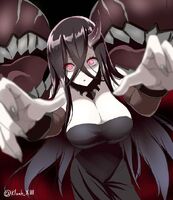 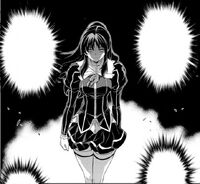 Add a photo to this gallery

Retrieved from "https://dxdfanon.fandom.com/wiki/Amatsu-Mikaboshi_(Solarverse)?oldid=97758"
Community content is available under CC-BY-SA unless otherwise noted.